The application of modular design to bespoke products 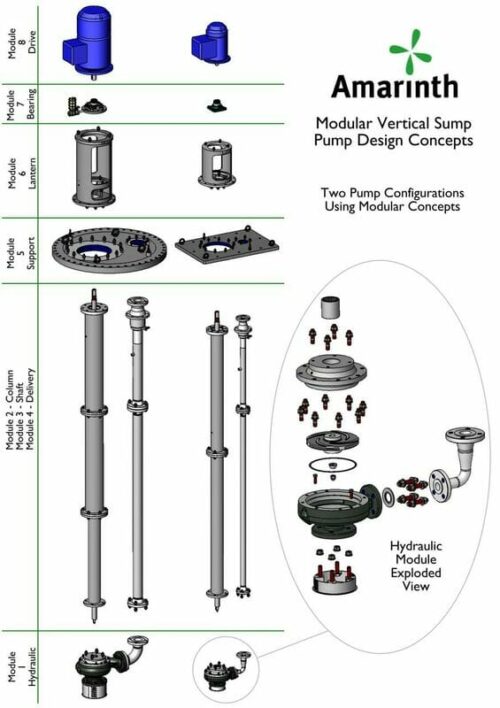 The application of modular design to bespoke products

Traditional pump manufacturers have always approached the bespoke design of vertical sump pumps from the ground up due to the number of variants and components involved. With ever increasing pressures from contractors to shorten lead times, Amarinth, a leading company specialising in the design, application and manufacture of pumps and associated equipment used in the petrochemical industry, decided to take a leaf from other engineering disciplines and develop the world’s first modular vertical sump pump that could be configured to handle over 100,000 variants. Oliver Brigginshaw, Managing Director of Amarinth explains how this was achieved.

The traditional VS4 API 610 vertical sump pumps were always considered bespoke designs to fit the depth and working parameters of the application. Such designs were expensive and the pumps had a long lead time due to the engineering design time that went with each unique order.

Within the oil and gas industry in particular, as operators try to maximise the return from dwindling oil reserves and meet ever tightening regulations, there has been a marked increase for bespoke products to fit more flexible production practices, but delivered on reduced lead times.

All the obvious efficiencies in the current bespoke design and manufacturing processes had been taken advantage of and so to meet the demands of the operators a fresh look at the overall development process for the vertical sump pump was required.

A modular approach
The engineering time was a significant part of the overall time taken throughout the contract execution. Saving time here would be the biggest win in reducing the product lead time. The problem was how to standardise a bespoke product that had over 100,000 combinations.

We decided to adopt a modular approach. Although there were some 100,000 product variants of the vertical sump pump to consider, the designers were able to break the product down into just nine distinct modules.

This modular approach now enables our designers to operate at an assembly level when delivering new designs allowing them to complete the design of a new pump using just nine modules rather than at a component level, which was the traditional way of designing such bespoke products.

Capturing intelligence in the model
Furthermore, each component in the design has been turned into an “intelligent” part. Key data such as the component description and its sequence number (a number that helps to identify the part on a sectional arrangement drawing) is stored within the model. As the modules are brought together to form a complete unit, all of this additional data is automatically pulled in as well.

Even “non-standard” designs can be easily and quickly completed as some 80% of the modules for a new design will come from the “standard” library leaving the designers free to concentrate on the area that needs further consideration to meet the customer’s specification.

A challenge of headroom
Following the completion of the new pump modules, BP approached Amarinth with a problem. It had an installation where 10 metre long pumps were needed but there was only 3-4 metres of headroom inside a building in which to raise them into for annual maintenance.

Using its new modular approach, Amarinth was able to deliver 80% of the pump from its “standard library” whilst concentrating efforts on a design that allowed the shaft and columns to be split every two metres so that the pumps could be removed in sections.

Rather than designing the product from scratch, which would have traditionally been the case, the engineers had to design just 20% of the components and so were able to quickly and easily achieve the customer’s requirements.

Engineering excellence is alive and well
The challenges posed by operators such as BP has shown the engineering excellence that can be achieved even with a traditional product such as a vertical sump pump. Although there was a lot of up-front effort in designing the modules, the savings on new contracts in terms of time to market are dramatic. We have been able to deliver a vertical sump pump in as little as 14 weeks that traditionally would have taken 26 weeks. The next step in taking further bites out of the lead time will be to see how our suppliers lead time can be improved…