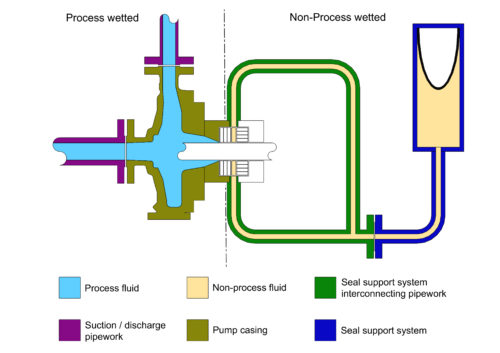 • Equipment that is in direct contact with what is usually a corrosive or toxic process fluid, which is known as “process wetted” equipment.

The “process wetted” equipment (to the left) comprises the pump casing, impeller and the pipework and valves etc. carrying the process fluid.

The “non-process wetted” equipment (to the right) comprises the seal support system and interconnecting pipework between the mechanical seal and seal support system along with any components not directly in contact with the process fluid such as fasteners and instrumentation etc.

The mechanical seal on the pump shaft is in contact with both the process fluid on one side and the pressurised barrier fluid, i.e. non-process fluid, on the other. It is usually considered as “process wetted” equipment since the material specification for “process-wetted” equipment will be higher than that for “non-process” wetted.

The standard for centrifugal pumps used in the oil and gas industry is API 610 and this, along with the knowledge of the process fluid, enables the selection of material for the process wetted components in the pump, including the casing and impeller, from API 610 Table H (see Figure 2). Depending on the corrosiveness of the process fluid, this material may range from low cost carbon steel to expensive exotic alloys such as duplex stainless steel or Hastelloy.

When selecting the material for the non-process wetted side of the mechanical seal, consideration should also be given to a seal or support system failure. If a primary seal fails, then the secondary seal would continue to retain the process fluid for a period of time. The system would normally have safeguards to stop pumping before any major damage occurs. Any process fluid that crosses into the seal support system during a failure would just need to be drained and the system flushed before being brought back into operation. In certain installations, should the seal support system fail, then the primary seal will reverse to seal the process fluid until the system reaches equilibrium. Again, the system will have safeguards to stop pumping before any major damage occurs.

The standard for seal support systems used in the oil and gas industry is API 682, however unlike API 610 there is no material specification table in API 682, other than a minimum requirement of 316 stainless steel, and so it is down to the seal supplier to propose a material or the customer to provide the material specification. The seal support system barrier fluid is usually water, a water/glycol mix or a light mineral oil and as such there is minimal corrosive action and a low risk of contamination should there be a leakage of the barrier fluid.

Without a customer material specification for the seal support system, the default position for the supplier would be to select materials based on the barrier fluid, and so this would usually be stainless steel. However, in some cases the customer mistakenly specifies that the seal support system should use the same material as for the pump, which if the pumped fluid is particularly corrosive or toxic would mean a high material specification such as duplex stainless steel or even Hastelloy. This would be a much more expensive material than necessary for the seal support system, which could be manufactured from stainless steel and/or carbon steel as it will never be in contact with the process fluid during normal operation as the barrier fluid would always be at a higher pressure than the process fluid.

Some specifications will contain a customer or project specific piping class. This will detail the material for the process pipework considering the process fluid, pressures and maintenance routines of the customer. The process pipework could be manufactured from the same material as the pump casing, but it could also be manufactured from a lower quality material as pipework is often considered a maintenance and expendable item by the customer in comparison to the pump itself. The piping class may be relevant when looking at the seal support system pipework, as below.

Instrumentation and other ancillary components

The materials for the non-process wetted ancillary components (such as such as the gauges and valves in the seal support system) only see the barrier fluid or non-process fluid and so should be fully specified by the customer and not simply follow other material specifications, otherwise unnecessarily expensive materials may be selected for such components leading to increased costs and extended procurement lead times.

If the customer does not specify the materials for the non-process wetted ancillary equipment and components as above, the suppliers are either forced to use more expensive materials than is necessary following other specifications or to make material decisions on the customer’s behalf, which may not be in the customer’s best interest.

a) The cost of a Plan 53B seal support system for a sour service pump could be some 60% higher if more expensive materials are used throughout than necessary.

b) The cost of other ancillary components for a sour service pump could be 30% higher than those more readily available and which would be suitable for the needs.

Not to mention the extended lead time needed to procure non-standard components and instrumentation manufactured in exotic materials.

If materials are not specified fully for all ancillary systems and components, then to deliver the most cost-effective design Amarinth will always seek clarification at one of three stages:

ii) the bid/quote stage, and lastly

However, the earlier full material clarification can be achieved, the easier it will be for Amarinth to meet the required lead time and ensure that the most cost-effective system is proposed, in addition to reducing the risk of confusion, queries and contract discussions at time of delivery.