Amarinth spares for Girdlestone 910 and 920 pumps

Many process plants have a life expectancy of over 25 years and during the normal course of operation numerous pump components will need to be replaced. These are usually purchased from the pump manufacturer, but what if that manufacturer is no longer in business or does not have spares for obsolete products? What if a performance increase is needed or new legislation has to be met?

If the only answer is to replace the pump then it is not only the cost of new pumps that has to be considered, nor even the additional cost of redesigning or changing pipe-work or ancillary equipment, but often more importantly the enormous cost of downtime. Depending on the industry, this could result in losses of £100,000 a day, or £100,000 each shift. In addition, to bring the plant back into operation, recertification of the new equipment may be required, further delaying production and adding further risk.

Girdlestone 910 and 920 pumps were installed for a broad range of applications across numerous industries. To keep these pumps running when components failed, high-quality spares were often reverse-engineered from the original components. In other cases however, performance or reliability issues may have been identified that could be improved or eliminated through re-engineering components, thereby extending the life and performance of the pump without the outlay, downtime and risks associated with replacing the pumps.

Reverse engineering can cause additional problems

For many years, companies have replicated common maintenance components (shafts, wear rings, seal and bearing housings etc.) to replace those supplied by an OEM. These components are usually manufactured after a process of reverse engineering - that is taking a component and attempting to replicate it in dimension and material as close as possible to the original.

Reverse engineering however not only copies the component, it also copies any inherent weaknesses in the component. In some cases these replicated parts perform on par with the OEM components, but in other cases they may cause additional or new problems through poor tolerances, inferior materials, quality of manufacture and dimensional fit.

With today’s powerful computer aided technologies, the tools are available to cost effectively design new components that can not only replace OEM components, but can improve on them significantly, outperforming and outlasting the originals:

• Three-dimensional modelling software allows components to be designed and then assembled digitally. Clash detection and tolerance modelling highlights areas where problems may occur.

• Sophisticated computational fluid dynamics (CFD) packages help engineers understand the flow of fluid through and around components allowing a component that was designed many years ago, before such tools may have been used, to be analysed and then re-engineered to deliver an improved efficiency or performance.

• Rapid prototype technologies such as stereo lithography or Laminated Object Manufacture can produce components (in a special plastic or film), in full size, directly from the 3-dimensional models, in a matter of minutes, allowing engineers to examine the components before any expensive tooling is committed.

Such re-engineering is not limited to simple maintenance items. For example, if a company is looking to increase the performance of an existing pump, the impeller could be re-engineered for optimum performance for specific duties which might include enhanced efficiency, better stability and lower Net Positive Suction Head (NPSH). All of this could be carried out within the body of the existing pump, without any need to change pipe-work, mountings or any other ancillary equipment.

Amarinth has produced a range maintenance components for Girdlestone 910 and 920 pumps that have all been carefully re-engineered to offer improved performance or reliability but with direct interchangeability with the original parts. These improvements are delivered with no additional pipework costs nor any more downtime than that which would be required for planned maintenance.

The table below shows some of the key components that Amarinth has re-engineered for Girdlestone pumps with the improvements that have been incorporated over the OEM component.

Below are examples of how Amarinth has re-engineered specific critical components for customers with Girdlestone pumps to improve reliability. 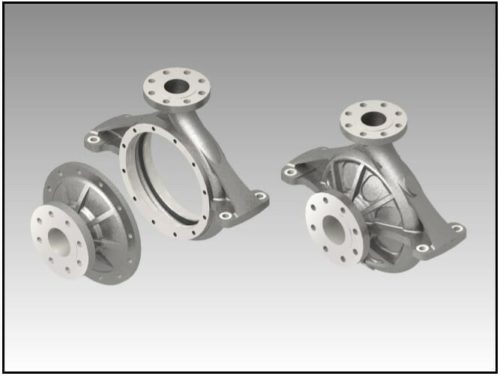 In this case the problem centred on an original Girdlestone volute casing with a removable suction cover. This was installed at a chemical plant and had for a long time suffered problems of leakage. Although the exotic alloy pumps were reliable, the aqueous organic solution that was pumped at 150°C was very aggressive and tended to leak at the suction cover joint after a period of operation. As well as being a potential hazard this caused unplanned downtime for maintenance.

Amarinth designed a single integrated component consisting of the volute and the suction cover that was dimensionally interchangeable with the original components so that no modifications were needed to the pump or the pipework. This new component was also up-rated from 16 bar to 20 bar in order to match the rating of the flange and was radiographed and dye penetrant tested.

Since fitting the new component there have been no further problems and the life of these expensive exotic alloy pumps has been significantly extended. The customer has subsequently purchased further spare parts from Amarinth. 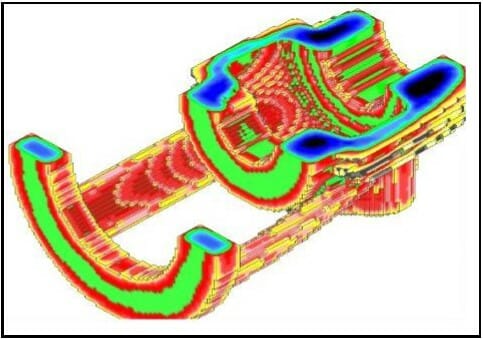 In this case the problem concerned reliability problems with existing API 610 pumps aboard a Floating, Production, Storage and Offloading (FPSO) vessel. The pump was suffering from repeated bearing failures but previous attempts by other service companies to improve reliability had been unsuccessful necessitating a pair of pumps to be maintained, one in production and one on standby. In addition to the cost of maintaining the pumps and regularly swapping them over and the associated downtime, with a failure rate of at least one every couple of months, it was only a matter of time before a pump would fail before its sister pump had been repaired.

Amarinth determined that the pump was running hot, mainly due to misalignment problems which had been made worse by previous refurbishment using some reverse engineered (non OEM) components. This ultimately resulted in a failure of the bearings and seizure of the pump. Using sophisticated computer-aided design, analysis applications and rapid prototyping techniques, Amarinth designed a totally new bearing bracket and fully tested the complete rotating assembly all within the 6 week time window allocated whilst at the same time up-rating other critical rotating components.

On fitting the modified pump, reliability immediately improved ten-fold leading to a significant decrease in maintenance costs and downtime.

Amarinth has produced re-engineered Girdlestone spares and components for many of the world’s leading companies in order to extend the life or improve the performance of their Girdlestone pumps without the need to undertake costly re-design of pipework or incur significant downtime, including: BP, Ministry of Defence, Maersk, British Sugar and BASF to name but a few.

Amarinth has now taken the concept of re-engineering one step further and has now designed a full range of interchangeable pumps which are equivalent to the former range of Girdlestone pumps. This was a strategic decision made when Amarinth was founded in 2002 as at that time the former Girdlestone 'name' and ownership changed hands. SPX, the current owner of the Girdlestone name makes reference to the former 'Girdlestone Heritage' range but from our customers experience and feedback do not actively support this line.

Customers with Girdlestone pumps can now purchase both spares and re-engineered components from Amarinth to extend the life of their Girdlestone pumps and have a route to fully upgrade their end-of-life Girdlestone pumps to a new modern and efficient pump with minimal disruption to the surrounding plant. When a customer purchases an Amarinth interchangeable pump they are also assured of full on-going support of OEM spares, installation and post post-delivery service.