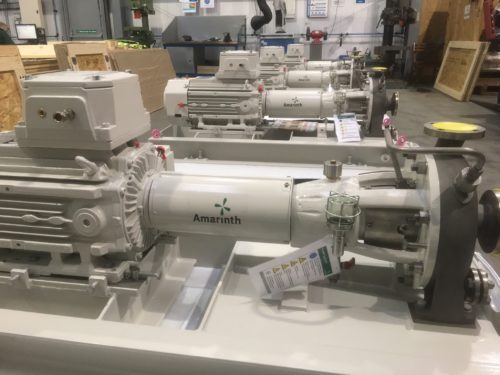 The Umm Lulu field is located in the Arabian Gulf, 30km north-west of Abu Dhabi, UAE, and is expected to produce up to 105,000 barrels of crude oil a day when fully developed. Offshore
platforms, such as Umm Lulu, utilise seawater in a number of their processes, however during intake the seawater must be treated with sodium hypochlorite to control algae and other marine biological fouling which would otherwise cause problems with the water systems.

When ADMA-OPCO required four sodium hypochlorite dosing pumps for the seawater treatment on the Umm Lulu platform, it gave Cumberland the challenge of supplying the pumps which had to comply with API 610 and stringent ADMA-OPCO specifications.

Sodium hypochlorite is highly corrosive and so in some applications plastic pump components can be used. In this instance however, Cumberland were not able to use plastic due to known reliability issues and failures as the plastic wears and smooths quickly in the harsh offshore environment, and so Cumberland started looking for a new solution for this challenging problem.

The low flow, high head horizontal dosing pumps were required on a tight 24-week delivery and Cumberland approached several suppliers to tender for the pumps. Amarinth was the only company that offered a solution.

To minimise corrosion from the sodium hypochlorite, Amarinth drew on its wealth of experience in casting exotic materials and proposed using titanium alloy for all wetted parts, including the casing, impeller and shaft, along with a high specification titanium seal.

Titanium is proven for long term reliability, particularly in aerospace, and is now becoming more widely used in industrial applications, but is still not a readily available material. Amarinth therefore worked with its extensive supply chain to source the raw titanium and the required titanium parts.

Titanium has to be cast under a full vacuum using copper crucibles to prevent the molten titanium attacking the crucible walls. Castings Technology International (CTI) in the UK is one of only a few foundries with the capability to cast large titanium components.

Amarinth worked closely with CTI to ensure an optimum design for the casting, including fillets and tapers to maintain good flow over changes of dimension or direction. Titanium is also difficult to weld and so to minimise requirements Amarinth designed an integrated drain bend and flange for the pump casting.

A patternless casting process was used where Amarinth provided the design electronically to CTI and moulds were machined directly out of blocks of sand. Without the need for patterns and core boxes this is a quick and cost-effective way to cast small production runs with high integrity and dimensional accuracy.

Amarinth provided 3.2 certification for the castings with high levels of traceability to ensure there was no mistaken substitution of components made from other materials.

Having overcome all the challenges, the titanium pumps were commissioned on the offshore Umm Lulu platform.

Amarinth has since applied its design and material expertise to numerous seawater intake, reverse osmosis, and desalination projects across the world. 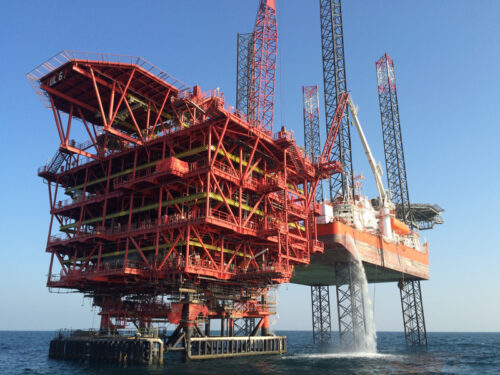 The company’s electrolysers and systems are installed in hundreds of locations throughout the world providing environmentally safe on-site disinfection for a variety of applications.

Cumberland has design and project engineering offices in the United Kingdom, the United Arab Emirates, Korea and sales and support offices in China, Singapore, India and Spain.

“We had been looking for a reliable supplier of robust, high specification titanium pumps for a heavy duty electrochlorination package for some time. Thankfully, with Amarinth's entry into the water treatment industry we now have a solution that matches our clients expectations. We expect that this will be the first cooperation of many between our two companies due the great compatibility of design of our products.”